Trading for over 65 years

The business of F. Robert Frise was founded in 1952 by Devon born Francis Robert "Bob" Frise. The first premises was found by his wife, Gladys, who suggested that he rent it using money saved from travel expenses to Newport as he worked at Marshall's upon leaving the Fleet Air Arm after World War 2. The shop duly opened in Freshwater's Station Road (when the Freshwater-Yarmouth-Newport Railway was running - now School Green Road) with only a second-hand clock in the window. As trade picked up, Bob bought stock and the shop quickly became established. At the time, the West Wight had 6-7 other watch, clock & jewellery businesses. Gladys Frise also worked in the shop and Daughter, Heather, helped out. In 1964 the business moved to its current location in High Street, Freshwater.

Bob's Daughter, Heather, began working at the shop in 1967 after a stint as a Darkroom Assistant at the Rocket Site above Alum Bay. Her first wage was just £1 per week! That same year, Heather married her Fiancé, Peter Cooke.

In 1971, Heather & Peter had a Son, Andrew, who spent much of his childhood at the shop premises where his Grandad & Mum worked. In 1985 Andrew began helping out at the shop and Bob took on the task of teaching him the skills of Horology (Clock Repairing). In 1990, Andrew joined the business full time and took over the Clock Repair side of the business under the title of Wightime.

The three generations then ran the family business and the 50th anniversary was celebrated in 2002. Gladys Frise sadly passed away in 2006 aged 93 and that same year Andrew married his Fiancée Donna. Just after Christmas 2010 Bob Frise, the man who had set up the business, passed away aged 94 leaving Heather and Andrew to run the shop with Donna also helping out behind the counter, as she had done since first joining the family in 2003. Donna had also been undertaking much of the behind the scenes duties since 2003.

A challenging era for the family commenced in 2012 and a major rebuild of the shop and living accommodation was required in winter 2013/14 with a forest of scaffolding overwhelming the building for just shy of 4 months. For around 10 weeks of the 18 week project the business had to trade out of the adjacent car port from a small, temporary, shop. The main shop re-opened again from mid-January 2014 with no trading days being lost during the rebuild. This very difficult period culminated in the sudden and untimely death of Heather in July 2015 after a spell of ill-health. Heather was a woman of all knowledge and had been the "face" of the business for 48 years. So, in less than 5 years the shop had gone from three generations to one and, in the latter part of 2015, Donna joined the business full time. So, with a rich history, F. Robert Frise continues to thrive and is now in the capable hands of Andrew & Donna, serving Customers across the Isle of Wight, the U.K, Europe and beyond. They also look forward to being of service to you in the near future.............. 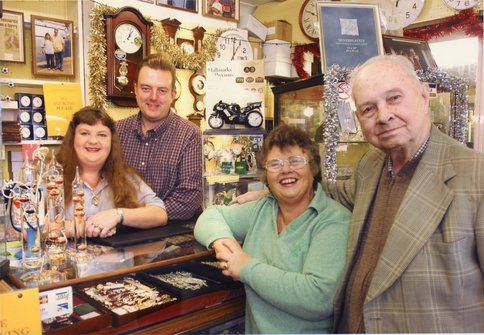 An early view of the present shop as J. Mabb, General Draper, taken in the early 1900s.

The first shop in Station Road, Freshwater, during the flash floods of August 1964. Bob Frise is shown standing where the pavement should be whilst wife Gladys and daughter Heather watch from the shop doorway.

A 1950s view of the Station Road shop as viewed from an adjacent premises that backs on to Stroud Recreation Field.

The first shop in Station Road, Freshwater, during the flash floods of August 1964 as two classic Southern Vectis buses pass by.

Heather, Andrew & Donna in the last I.o.W County Press Photo Prior To Heather's Passing. May 2015.